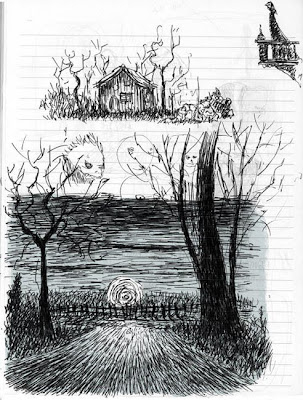 I've only seen one "ghost" in my life many years ago , at least I like to think it was a real ghost.
This particular phantom gets a mention in Ontario ghost books and I don't remember his real name so I'll call him The Ghost of Lake Skugog.
Above is my doodle from few years ago a notebook planning on doing a cleaner version and the inspiration for the latest Happy Undertaker.
Friends who lived close to Lake Skugog first told me about the ghost and how teenagers from the surrounding towns would go up to the old farm road and park their cars and watch the farmers field late at night where the incident happened hoping for a glimpse of the ghost.
The story goes that a motorcyclist had made a habit of crossing the field of a farmers , late at night, after some rendezvous. The farmer, to deter the rider, built a fence along the edge of his property and the road. The rider again crossed the field at night, only this time he collided with the fence. The motorcycle tumbled and rolled and the unfortunate rider was thrown to his death.
My friends had gone on midnight vigils before to see the apparition but had never seen him.
One late night we decided to drive up north to the farmers field. We parked on a dirt road that faced the field, fence and road that ran beside the property. It was pitch black when we turned off the car headlights except the light from the sky and we sat and laughed quietly and tried to spook each other.
An hour and half had passed when suddenly a single, small light appeared on the horizon of the field and headed toward us. We jumped and choked back yells and our eyes popped as we watched the lone light weave through the field, getting larger till it finally hit the fence, where the light jerked and bounced and fell downward toward the road and extinguished and a tiny red tail light flashed.
We were all pretty excited and freaked out and waited around for another hour hoping to see it again. Eventually we pulled out and headed home very happy with our small encounter with the supernatural. Its been explained or unexplained as lights bouncing off various things to give that impression but heck,thats no fun anyway, better a ghost I say.
In The Happy Undertaker the ghost decides to continue on his way.
Posted by Drazen at 11:07 AM

Email ThisBlogThis!Share to TwitterShare to FacebookShare to Pinterest
Labels: The Happy Undertaker

Cool story! Do you only see the light if sitting in the car from that angle of the road though? I wonder what would happen if you actually stood in the field next to the spot where the light hits the fence?

I dont' know but thats supposed to be the best spot to see it. My friends had actually gone a number of times over they years and had not seen it. This was there first time and I was first time lucky:-) We did wait there for like 2 or 3 hours or something. I don't know if anyone has tried to stand right at the spot where the lights hit the fence where the rider died.

Promote Your Page Too